Support Chen By Sending in a Picture With Dark Glasses

As we celebrate the confirmation that Chen is alive many of you are no doubt wondering, “What can I do to help support Chen?”

In addition to spreading the word about Chen’s case and praying for his release, there is a simple and yet profound way to show your support for Chen. Take a picture of yourself with sunglasses on and and email it to us by clicking here.

Chen was born blind and given no formal education. Despite this he stood up to defend the weak and helpless, speaking fearlessly against corruption in the Communist bureaucracy. All over China the face of Chen Guangcheng with the signature dark glasses of the blind, is a symbol of the fight for liberty and freedom in China.

It is illegal in China to support human rights activists such as Chen Guangcheng, but a simple picture of a person wearing sunglasses evades the  censorship of China’s Communist regime. 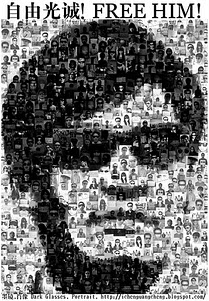 A Chinese political cartoonist and satirist known only as Crazy Crab combined hundreds of these pictures into this portrait of Chen. Chen has been an inspiration to us all and now it is our turn to show support. We hope that he will hear of our efforts on his behalf and be encouraged.

We encourage you to read the press release from our friends at Women’s Rights Without Frontiers below. We are excited that a human rights activist such as Congressman Chris Smith has chosen to support this campaign. We pray that Chen will be free soon. 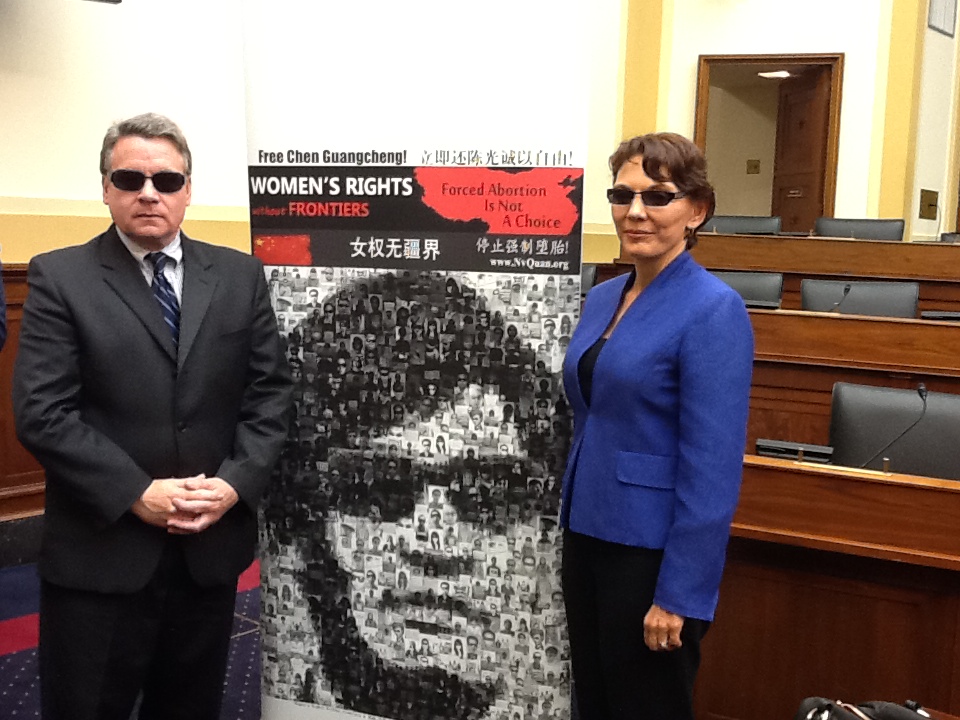 Washington, D.C.  Congressman Chris Smith has demonstrated his ongoing commitment to free Chen Guangcheng in yet another way:  by wearing sunglasses.  After the Congressional-Executive Commission on China hearing Tuesday, Congressman Smith joined Reggie Littlejohn, President of Women’s Rights Without Frontiers, to be photographed next to a large image of Chen, in connection with WRWF’s Sunglasses Campaign.

Littlejohn stated, “For the past three decades, Congressman Smith has been the most powerful and persistent voice on Capitol Hill for human rights in China. He has held dozens of hearings, exposing the truth about forced abortion, the persecution of Christians, and other human rights abuses. He has worked tirelessly on behalf of Chen Guangcheng, sponsoring a bill on his behalf, trying to visit him, and now supporting the international Sunglasses Campaign.”

WRWF launched an international Sunglasses Campaign to support a similar campaign within China.  People from around the world have donned sunglasses and emailed their portraits to the WRWF website, to support Chen.  A Chinese political cartoonist, whose pen name is “Crazy Crab,” created the image of Chen using hundreds of these sunglasses portraits.

In her Congressional testimony Tuesday, Littlejohn quoted a key Chinese activist who said, “I think it’s very helpful for people all over the world to show they care about Chen through the Sunglasses Campaigns.  I think it’s very important to show support inside and outside the country – we can work together.” These campaigns are spearheaded by Women’s Rights Without Frontiers and Dark Glasses Portrait.

In answer to Congressman Smith’s question at the hearing about whether a double-standard is applied in Western policy towards China, Littlejohn criticized Vice President Biden for his remark, made in China, that he “fully understands” China’s One Child Policy, and yet is “not second-guessing” it.   She stated, “If it’s not ok in the United States, it’s not ok in China either.  That statement really undermined the moral credibility of the United States on the world international scene.”

Littlejohn called upon the Chinese government to grant a visa to Congressman Smith so that he can visit Chen.  She also urged U.S. Ambassador to China Gary Locke to seek access to Chen.  Beyond this, she urged supporters of Chen to intensify their efforts to advocate for his freedom.

The CECC hearing was held to commemorate the December 10 anniversary of the Nobel Peace Prize award ceremony for still-imprisoned dissident, Liu Xiaobo.