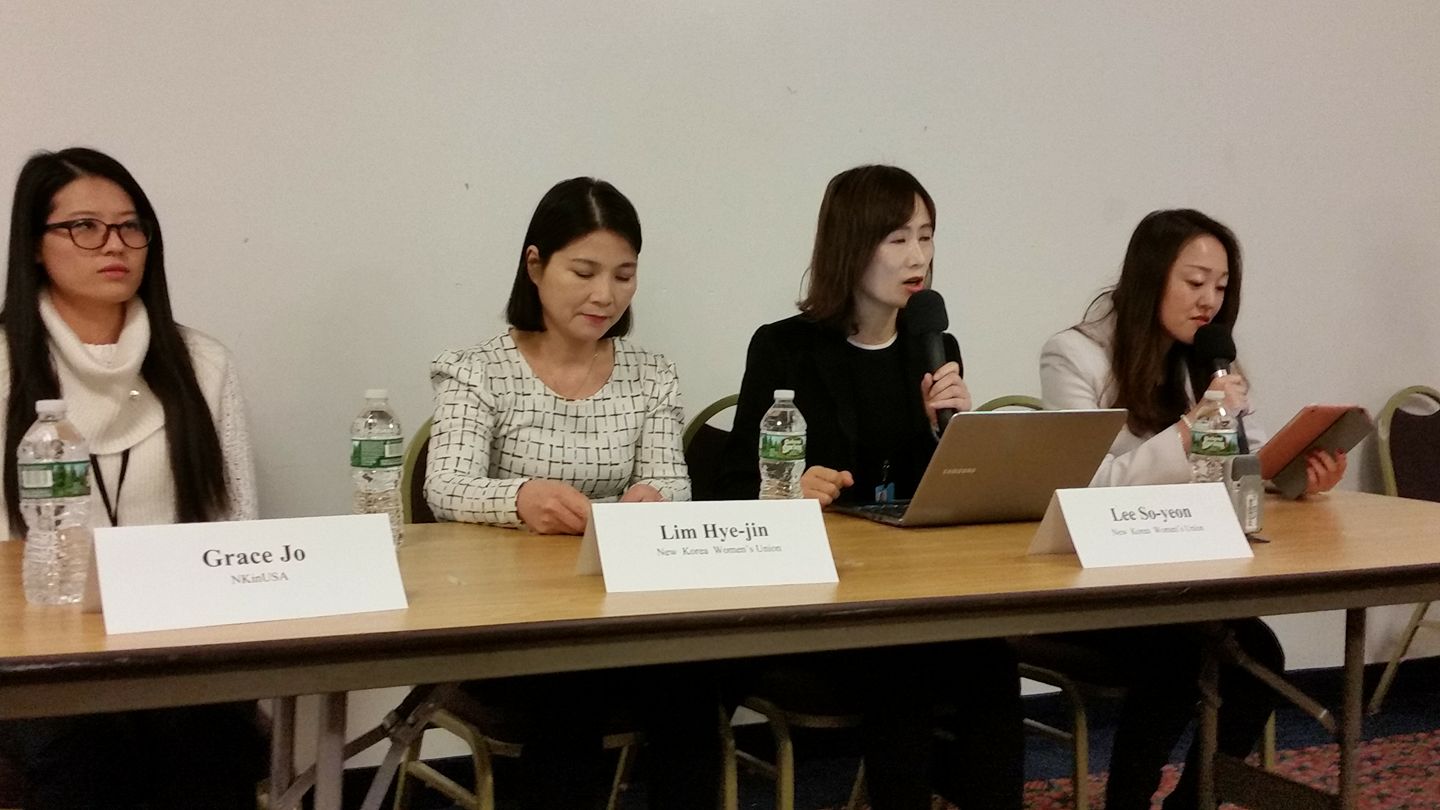 On March 17, Executive Director, Ann Buwalda, and staff delivered remarks at an event at the UN Commission on the Status of Women, co-sponsored by Jubilee Campaign. The event was titled North Korean Women: Destitution and Human Trafficking in China.
The event featured three North Korean women defectors: Grace Jo, Lim Hye-jin, and Lee So-yeon. Each woman shared a powerful testimony of the horrible abuse they faced in North Korea and in China.

Ms. Jo is one of three family members who survived from her large North Korean family. During the panel Ms. Jo explained that the three primary reasons women flee from North Korea to China are to make money, to obtain health care, and to find freedom because these things are critically lacking in North Korea. She described the heroism of the North Korean women she remembers from her childhood who risked their lives and faced humiliation to provide for their families. Many women go to China hopeful they will find opportunities to improve their live, but most get exploited by Chinese brokers and repatriated to North Korea by Chinese authorities. Grace herself experienced repatriation and torture. She recounted, “I remember when Chinese officials sent me back to North Korea; both times people were suffering, being tortured, and starving. The only memories I have from North Korea are fear, hunger, and sorrows. I don’t have any happy memories from my home country.”

Ms. Lim escaped North Korea three times. The first two times that she escaped to China, she was sent back to North Korea by Chinese authorities. She said, “They searched my body for hidden money and goods and undressed me.” She described the horrid conditions in the prisons and detention centers. Authorities make women strip naked, as they did with Ms. Lim, and force them to do squats continuously trying to find money that may be hiding in their bodies’ cavities. Ms. Lim also told the story of how a woman who shared a room with her in prison gave birth to a baby while they were in the prison after being impregnated by a Chinese man. The woman was transferred to another prison and forced to leave her baby behind. A few days later, a security guard killed the child.

Ms. Lee explained the trafficking of North Korean women is worse than ever with the developments of cyber trafficking. Chinese brokers typically sell North Korean women to unmarried Chinese men, but now they are also forcing them to perform for internet pornography. Ms. Lee said, “Brokers in China are putting them in apartment rooms, locked up, and are forcing [them to be] sex slaves…In that locked up room, the women are selling their bodies through the internet site, and they don’t even get paid by the brokers.” 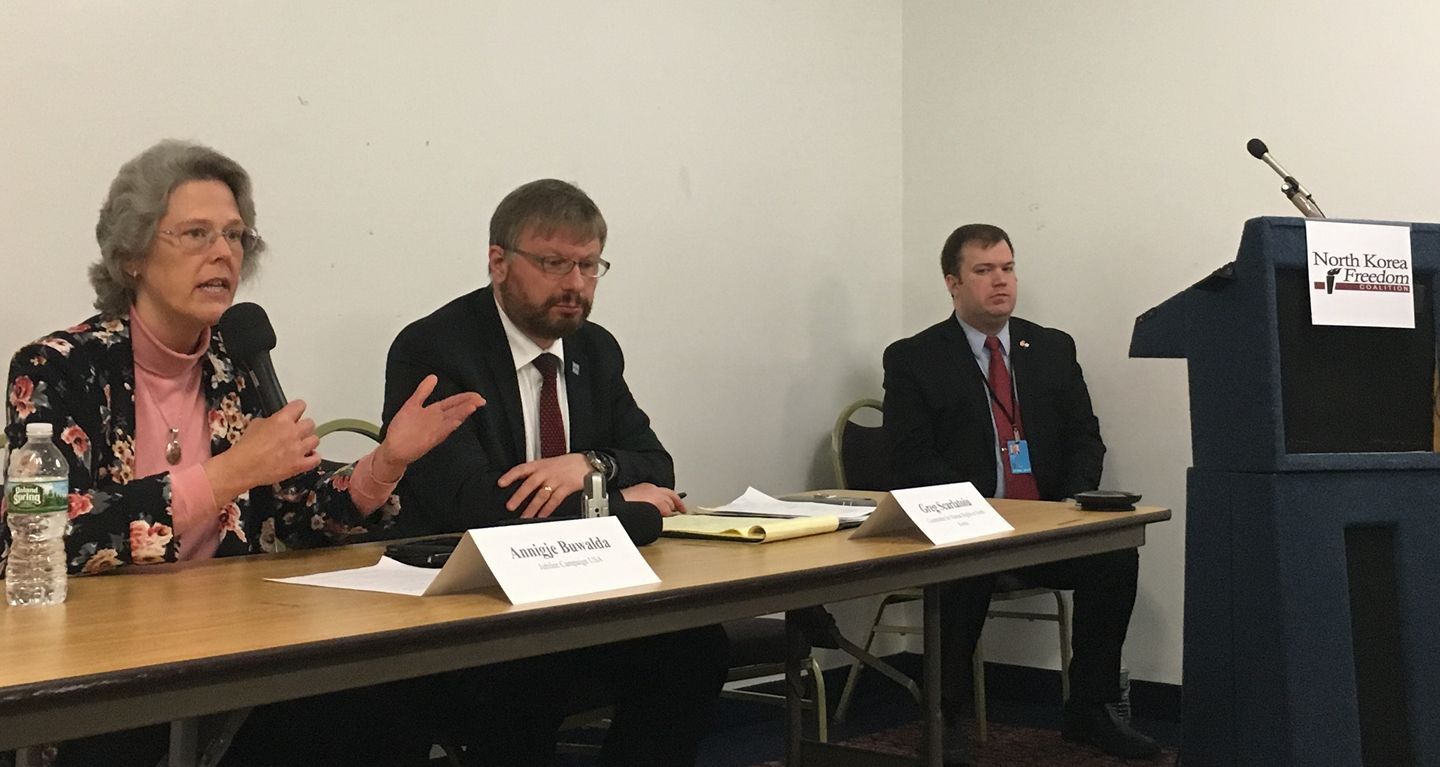 After the panel of witnesses told their stories, our expert panel consisting of Jubilee Campaign Executive Director, Ann Buwalda, and the Executive Director of The Committee for Human Rights in North Korea, Greg Scarlatoiu, gave further analysis and recommendations. Mr. Scarlatoiu explained that his organization’s research has revealed that North Korean prison camps have expanded for the sole purpose of accommodating more North Korean women who have been repatriated by China. Ms. Buwalda explained that if China would simply adhere to its international obligation to protect refugees the desperate North Korean women who continue to pour over its borders could find assistance rather than destitution and exploitation. She described the necessity for the international community to pressure China into protecting these refugees.

After the event, the panelists, attendees, and press went to the Chinese mission to deliver a letter requesting China to stop repatriating North Korean refugees. Then select members, including Jubilee Campaign staff participated in a meeting with the South Korean ambassador to discuss strategies for dealing with North Korea’s human rights abuses.