We identify ourselves as a group of religiously and ethnically diverse individuals and organizations that share a common goal to ensure the procurement and advancement of religious freedom on a global scale. We wholeheartedly agree with and promote the principle of freedom of religion or belief and are resolved on identifying and attempting to address the shortcomings of its application and the existence of violations of religious freedom worldwide.

We would collectively like to address the current obstacles to religious freedom as well as the presence of religious persecution in Pakistan. It would of course be a great disservice to not mention the strides taken by your government to confront the sinister and reprehensible reality of religiously driven crimes, as well as curb the existence and effect of such crimes of violence. The government of Pakistan has, since 2018, secured a more inclusive political office by electing officials of various minority religions, released prisoner Asia Bibi from her lengthy and unjust sentence, prevented demonstrations of violence, and even formed a commission focused on the protection of the rights – both religious and secular – of ethnic and religious minorities in Pakistan.

Despite these genuine and effectual efforts of the government of Pakistan to make progress to meet international values of religious freedom, the most dangerous form of persecution – as well as the most difficult to address due to its seemingly inextricable presence within law of Pakistan – are blasphemy laws which have led to the unfair imprisonment of hundreds with a disproportionate amount being minorities and dissenting Muslims.

The Pakistan Penal Code identifies blasphemy as a crime punishable by imprisonment and, in some extreme cases, death. Within the penal code of Pakistan, there exists an entire Chapter composed of various sections regarding crimes related to religion. Section 295 emphasizes the illegality of actions such as destruction of holy places of worship and religious texts, and “295C. Use of derogatory remarks, etc., in respect of the Holy Prophet.” Section 298 highlights another crucial religious crime: “298. Uttering words, etc. with deliberate intent to wound religious feelings.”

We believe that the enforcement of these laws, while perhaps not intentional, is fundamentally and intuitively oppositional to international norms regarding religious freedom. At the surface, these regulations appear to protect ‘religious feelings;’ however, in reality, they are often utilized incorrectly to justify incarcerating religious minorities and individuals practicing free speech protected under international law. In 2010, the Christian woman Asia Bibi was falsely convicted and sentenced to death by a lower court in Pakistan. After spending almost ten years imprisoned with the fear of her seemingly irreversible death sentence looming over her, she was officially acquitted and released in late 2018.

Despite the progress made with the release of Asia Bibi, another woman, Shagufta Kausar, and her husband Shafqat Emmanuel, were incarcerated in mid-2014 under the same blasphemy laws that led to Bibi’s decade-long sentence. Shagufta and Shafqat were falsely accused of sending texts that were ‘blasphemous’ to a Muslim religious official. These accusations are quite blatantly both targeted and inaccurate, as the Christian couple was illiterate and not fluent in English, the language the texts were written in. Shagufta and Shafqat are serving time in separate prisons and are prohibited from seeing their four children.

Saif-ul Malook, the Muslim lawyer presiding over Asia Bibi’s case and responsible for her release, has officially taken up Shagufta and Shafqat’s case as well. While we are hopeful that this case will achieve similar satisfactory results as well as grateful for the Malook’s selfless act, we feel that the source of the problem- in this case, the improper and unjust application and nature of the blasphemy laws- must be addressed to prevent future unlawful detainment of innocent persons.

The fact is that Pakistan Penal Code sections 295 and 298 are often misused, leading to the arrest and conviction of innocent individuals, as displayed above. To date almost 80 people have been killed by societal actors after the mere allegation of blasphemy. We, therefore, urge the Pakistani government to reform legal procedures to ensure that no unjust or false conviction or sentence is placed upon innocent individuals. In addition to completing detailed and unbiased reviews of the accusation before arresting or making legal decisions with strong implications for the accused, we suggest such provisions as providing the accused with appropriate and adequate representation and defense in court proceedings, creating training for officials to accurately and impartially recognize any forms of religious violence towards any group, and providing a swifter response to charges to prevent long waiting periods of incarceration before a proper court hearing.

•Association of Advancement of Freedom of Religion or Belief in Vietnam

•Committee for Religious Freedom in Vietnam

•International Center for Rights and Justice

•Save the Persecuted Christians

•South Asia Minorities Alliance Foundation and The Voice of Karachi

•Trong Phan and One Bread

•Union of Councils for Jews in the Former Soviet Union (UCSJ) 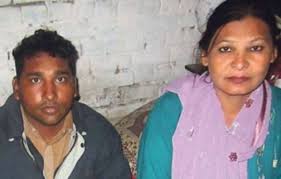 In 2014 the Court sentence Shafqat  Emmanuel and Shagufta Kausar to death on blasphemy charges. Shagufta is being held in Multan prison – the same prison as Asia Bibi was held. Police are keeping Shafqat in Faisalabad prison.

The couple’s four children have to live as orphans with occasional visits to their parents. They currently living with other family members.

More on their case