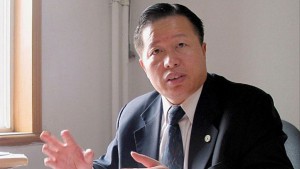 Chinese human rights lawyer, Gao Zhisheng, has been missing from his home for over a week. His wife, family, and friends have been unable to contact him since August 13th. Zhisheng’s disappearance comes in the midst of him serving a house arrest that began in 2014. This is the latest sentence he has served in a pattern of targeting from the Chinese government.

In 2005, Zhisheng’s license to be a lawyer was taken away and he was charged in 2006 with “inciting subversion of state power.” He was sentenced to three years in prison but was released early. Then in 2007, he was again detained without reason for 50 days, and was tortured.

In 2009, Zhisheng’s wife and children fled China and came to the United States. Soon after, Zhisheng was taken by police and his whereabouts were unknown for over a year, from February 4, 2009- March 27, 2010. He was then released on parole, but re-arrested in 2011 for supposedly violating the terms of his parole. The Chinese authorities sentenced him to another three-year imprisonment. Since his latest release from prison in 2014, he has remained under house arrest.

Zhisheng’s wife is very concerned about her husband’s well being and the inability of anyone to contact him. After failed phone calls, his brother went to Zhisheng’s home and found it empty.

The wife said, “Now that I know he has disappeared, I am in a state of emotional collapse.”

Some suspect his disappearance could be linked to an interview he recently gave in which he spoke against the Chinese regime.

Zhisheng has been a powerful defender of Christians and other groups in China who face intense discrimination. Please pray for Zhisheng’s well being and freedom and that God would strengthen and comfort Zhisheng’s wife and children.