Following devastating earthquakes in April and May which killed thousands of people many Christian aid organizations and churches around the world have raced to send aid to feed and shelter Nepali villagers and to rebuild their crumbled homes.  Soon after Christian charities responded with desperately needed aid to survivors nationwide, the Nepali constitutional drafting committee has responded by removing religious freedom from the draft Nepali constitution.

The drafting of a new constitution has been ongoing for the last seven years in Nepal, following the collapse of the 240 year old Hindu monarchy.  Recently, a disturbance occurred in the Constituent Assembly by the Rastriya Prajatantra Party Nepal (RPP Nepal) demanding that Article 31 of the Constitution, which to an extent protects religious freedom, be amended. As a result, the three major political parties (Nepali Congress, the Communist Party of Nepal/Unified Marxist-Leninist, and Maoist) have agreed to completely remove the provision and any protection. The chair of RPP Nepal said that the party is fighting for the return of the Hindu Kingdom by abolishing the secular state.

Concerns had been raised about whether Article 31 would have provided full protection to each Nepali citizens to choose his or her religion, particularly its third clause.  Article 31 had stated that “Every person shall have the right to profess, practice and protect his or her own religion according to conviction and the freedom to separate oneself from any religion” and “Every religious denomination shall have the right to maintain its independent existence, and, for this purpose, to operate and protect its religious sites and religious trusts, in accordance with law.”  However, the third clause contained this anti-conversion language, “In exercising the right entrusted by this article, any act which may be contrary to public health, public decency or morality or incitement to breach public peace or act to convert another person from one religion to another or any act or behavior to undermine or jeopardize the religion of each other is not allowed and such act shall be punishable by law.”  This broad anti-conversion language reflects similar laws in affect in several states within the neighboring country of India and which laws have at times been used to justify the arrest of pastors and violent targeting of prayer meetings and Bible studies. 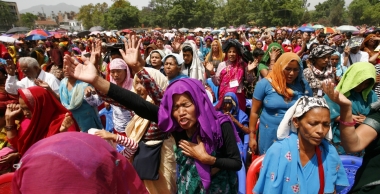 Nepalese citizens fear that simply discussing one’s religion could be seen as an act of conversion and therefore punishable. This anti-conversion clause of Article 31 was viewed as threatening by Nepalese Christians, which comprises about 1.4% of the population.  Reports have indicated that those who are found guilty of breaking the anti-conversion clause could serve a sentence of up to five years in prison or fined up to 50,000 Nepalese rupees.  Thus, the clause would also discourage conversion to be seen as a positive individual choice, and would jeopardize the freedom and livelihood the Nepali people who chose to leave the Hindu faith of their forefathers.

In 1990, the prior monarchy had removed from the Nepali constitution in effect at that time similar constitutional and legal threats to the freedom of religious choice, which imposed prison terms of seven years and forced reconversions.  Dozens of Nepali Christians had been imprisoned prior to the removal of the anti-conversion laws related to the 1990 constitution.

As the country recovers from the massively destructive earthquakes it endured in April and May of this year, it is urgent that the Nepalese government finalize a constitution that not only provides a stable structure of government, but ensures peace and religious freedom throughout the country. Restoring the first two clauses of Article 31 would accomplish that.

Nepali Christians are calling for the international community to urge Nepal to abide by the International Covenant on Civil and Political Rights which the country has ratified. Article 18 of the Covenant states:

“Everyone shall have the right to freedom of thought, conscience and religion. This right shall include freedom to have or to adopt a religion or belief of his choice, and freedom, either individually or in community with others and in public or private, to manifest his religion or belief in worship, observance, practice and teaching.”

During the past 25 years, the Nepali church has enjoyed freedom and equality within the society and have demonstrated their constructive and productive participation in all aspects of society building, despite years of strife caused by the Maoist insurgency.  Nepal should not retrogress to the pre-1990 imposition of the religion of one’s forefathers upon its citizens and again punish anyone seeking to chose his or her own faith.  Instead, at the urging of Nepali Christians the new constitution should abide by the country’s international obligations and protect each person’s fundamental right to choose his or her own religious beliefs.