The world is facing the largest refugee crisis on record. There are currently over 65 million displaced people around the world–that’s 1 in every 113 persons. These people have been forcibly driven from their homes due to factors such as war, famine, and persecution. To make matters worse, a majority of those displaced are children.

World Refugee Day is June 20. The day will be commemorated by churches on the Sundays of June 18 and June 25. Continue reading to see how you can join us in supporting refugees.
Jubilee Campaign recognizes that restrictions on religious freedom and the persecution of religious minorities contribute greatly to the refugee crisis.

As you know, Syria’s religious minorities have been subject to genocide and other forms of intense persecution due to war and terrorism. Half the population has been displaced with nearly 5 million forced to leave the country entirely. This not only is putting men, women, and children in desperate situations, but it is ridding the land of the Christians who represent its ancient religious heritage.

Syria is currently the world’s biggest producer of refugees and surrounding countries are struggling to support the influx of displaced Syrians. Unfortunately, as long as terrorism and the Syrian war continue, refugees will continue to pour out of Syria only making the refugee crisis more extreme. 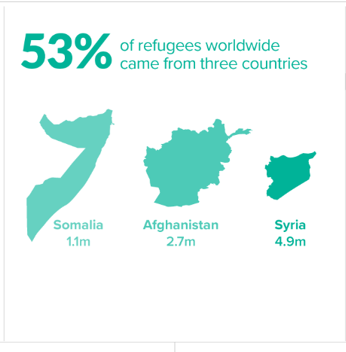 We believe the refugee crisis will continue to worsen until a viable and sustainable solution is found that brings protection to all people groups and peace to Syria. That is why Jubilee Campaign has begun advocating for a Syrian government that is secular, pluralistic, and democratic.

This may sound impossible to achieve in a country such as Syria, but did you know that a functioning democracy already exists in parts of Syria?
In northeast Syria an autonomous region exists that includes the cities of Afrin, Jazira, and Kobane. In this region, Kurds, Arabs, Syriacs, Turkmen, Armenians, and Chechens of various faiths live peacefully alongside of one another.

These communities created a social contract to govern themselves. This is the model we are using to promote such a solution for Syria.
We are seeing some of the worst humanitarian situations in the world for refugees leaving the Middle East. Would you join us in bringing a solution to Syria? One that is inclusive, sustainable, and that would allow people to stay in their homes and thrive. Please join us by making a donation here. Please make a note in the memo line that the donation should go toward Syria.