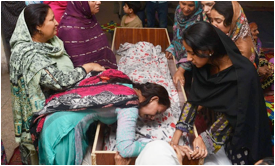 Christians in Pakistan were met with tragedy on Easter Sunday. At least 72 people were killed including 29 children, and over 340 injured in a suicide blast at Gulshan Iqbal Park in Lahore. It is believed that that approximately 20 Christians were killed, and over 200 Christians injured.

Around the time of the blast, an estimated 3,000 people were at the park, many of which are believed to be Christians there in celebration following Easter services. The suicide bomber blew himself up at an exit gate of the park where many women and children were.

A spokesman of Jamat-ul-Ahrar, a group that is related to the Pakistani Taliban, claimed the group was responsible for the attack stating, “We claim responsibility for the attack on Christians as they were celebrating Easter.”

The attack has raised the issue of security. Many eyewitnesses claimed that there was no security at or around the park. Following the attacks the Punjab government announced there would be three days of mourning, and Prime Minister Nawaz Sharif chaired a meeting to analyze the security situation.

The blast reaffirmed the State Department’s need to designate Pakistan as a Country of Particular Concern (CPC). CPC’s are countries that commit systematic, ongoing, and egregious violations of religious freedom. The State Department is then required to provide the Secretary of State with specific policy options to address the violations. The past few years the United States Commission on International Religious Freedom (USCIRF) has recommended Pakistan to be designated as a CPC, but it has yet to make State Department’s list.

Please join us in praying for all those affected by the attack in Pakistan. We pray that Pakistani Christians will not be discouraged in their faith, but have full confidence in the Lord during this time.

(The above picture was sent to us by The Zindagi TV Team. To learn more, visit https://lifeforpakistan.com/Media-Outreach)