A group of delegates from Plateau State will met with the International Criminal Court on July 25, 2011 to collaborate with their ongoing investigation into the violence and massacres that occurred in Jos during 2010. At the meeting Jubilee Campaign submitted following summary of the crisis and the legal difficulties facing Plateau State. The information below contains excerpts from fact-finding reports by Jubilee in concert with other human rights groups as well as a presentation by Plateau State representatives at an event hosted by Jubilee.

SUMMARY REPORT ON CIVIL STRIFE, IMPUNITY, AND THE RULE OF LAW IN PLATEAU STATE NIGERIA*

Civil strife and violence have been recurring problems in northern Nigeria for decades. In 2010, the problems escalated to a massive scale in Plateau state, particularly in Jos City and the surrounding area. The conflict in this area is caused in part by the minority ethnic groups,1 previously empowered by the military regime, taking violent action instead of using democratic processes. The conflict is augmented by the undermining of the justice system and the rule of law by 1) constitutional provisions, 2) actions by the federal government usurping state power, 3) interference from other northern states, and 4) overall judicial impunity and disproportionate sentencing. The scale of the violence and the lack of justice has brought the case of Plateau state before ICC prosecutors who have an ongoing investigation on the matter.

The non-indigenous, minority ethnic groups in Plateau state were favored, privileged, and empowered under the military regime that was in control of Nigeria prior to democratization in May 1999. After the institution of democracy, they had to use democratic systems to assert their will and control2. Dissatisfied with their inability to assert themselves over the majority, they established a recurring pattern of violence and mayhem as a means of gaining control. In January 2010, violent clashes broke out in Jos. Unlike previous outbreaks of violence in the area, military presence and an imposed curfew did not stop the chaos. Violence continued over the course of the year. The worst and most infamous occasion occurred on March 7, 2010 when several communities on the outskirts of Jos were attacked in the middle of the night with guns, machete’s and fire.3 By morning hundreds of men, women, and children had been massacred and bodies were piled in the streets.

Impunity and the Rule of Law

These types of violent outbreaks have gone unpunished in Nigeria for decades. Perpetrators are consistently treated with impunity, encouraging future violence and chaos. Plateau state was unable to control or properly respond to the violence in its territory during 2010 due to several factors.

1. Lack of Control over Security. Under the Nigerian constitution, state governors have no power over the police force. The police force in Plateau state is controlled by the federal government<,4 as is the entire country’s prison system. These police forces have failed to intervene during murderous outbreaks of violence and have refused to implement security measures passed by the Plateau state legislature.

2. Undermining of the State Prosecutorial System. Although the security forces are under the federal government’s control, under the Nigerian constitution criminal prosecution is the right and duty of state governments. Despite this provision, the federal government usurped the role of Plateau state in responding to the March 2010 massacre. The police force did not thoroughly investigate and quickly removed suspects from the state,5 frustrating any meaningful prosecutorial investigation by Plateau state. Furthermore, federal prosecutors took over the cases and the numerous suspects were tried by the Federal High Court in Jos instead of in the state judicial system despite the fact that the Federal High Court was not equipped to handle the massive number of cases. Due to this usurpation of state authority, the prosecution of these cases were not concluded speedily and the first convictions for the March Massacre were in December 2010.

3. Interference from Muslim Controlled Northern States. Plateau state’s northern neighbors are mostly Muslim controlled, with unconstitutional Sharia law justice systems in place. These states influenced a coalition of governors who interfered with Plateau state’s attempt to sue the federal government for usurpation of it’s prosecutorial power by putting pressure on the governor of Plateau state and passing resolutions against Plateau, claiming that Plateau state could not “be a judge in their own case.”6 They are also alleged to have provided safe havens for the attackers to gather and re-launch their efforts.

4. Judicial Impunity and Disproportionate Sentencing. Although the Federal High Court in the name of deterrence did convict some perpetrators of the March 2010 massacres, the culture of impunity still persists due to enormously disproportionate sentencing. Despite the fact that the charges for which fifteen of the suspects were convicted carried a life sentence, the judge reduced it to a mere ten years. This sentence is so disproportionate to the crimes committed—hundreds of innocent people slaughtered in one night—that it has no real deterrent effect, as evidenced by the bombings that occurred in Jos one week after the sentence was handed down. The federal court has since removed itself from Jos because of the volatile situation, further disrupting the execution of justice in Plateau state.

The following measures are necessary for Plateau state to deal with the continued civil strife in its territory: 1) the Nigerian constitution should be reformed to give practical control of security forces to the local governors; 2) the federal government must in the mean time restore the prosecutorial rights to Plateau state, instruct security forces to implement state legislated security measures, and insist on the non-interference by neighboring states; and 3) both the federal and state judicial systems must hand down sentences that are proportionate to the atrocities perpetrated.

Report of the Governor’s Office Plateau State, Nigeria: A Kaleidoscope of Conflicts in Plateau 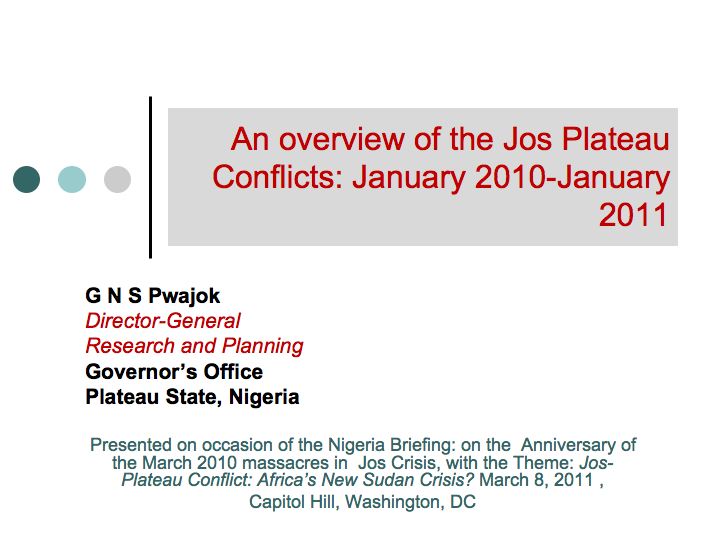 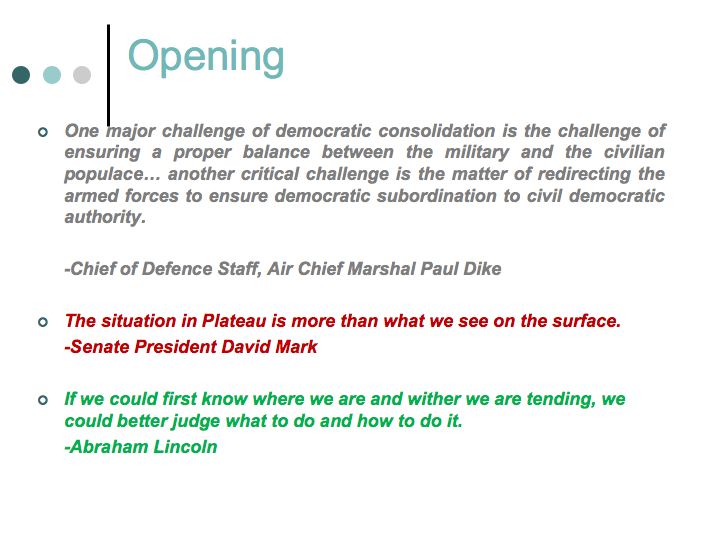 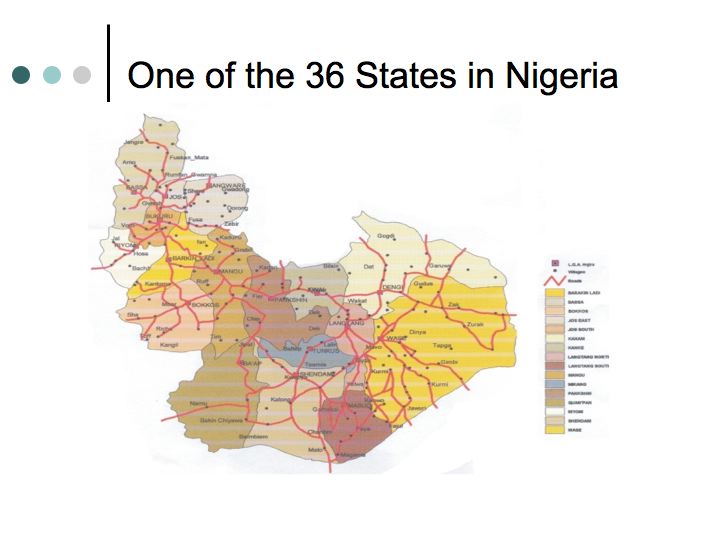 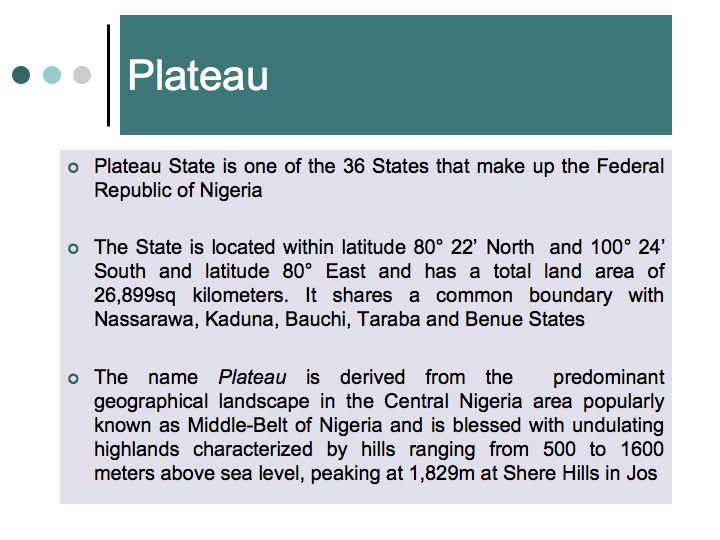 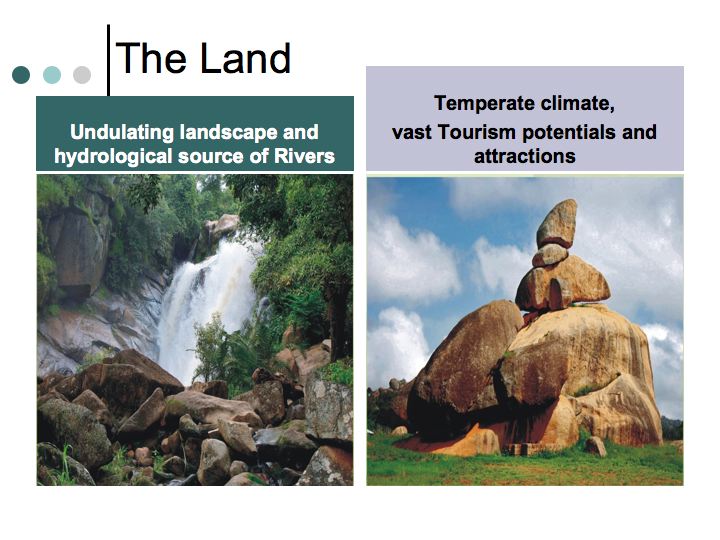 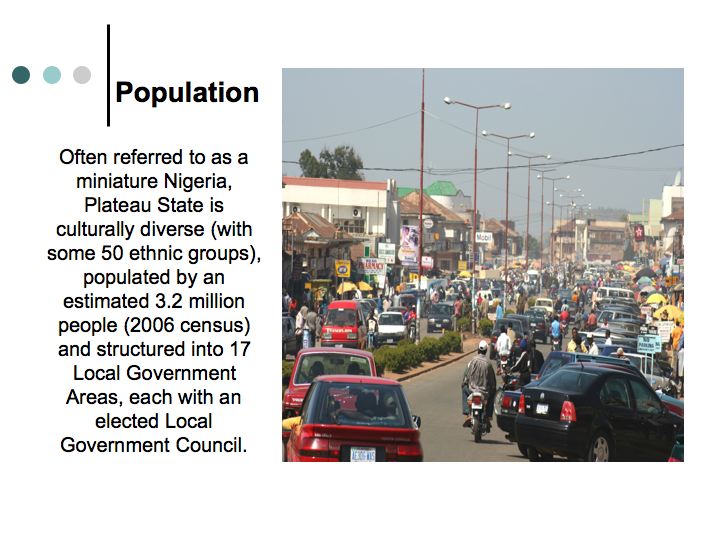 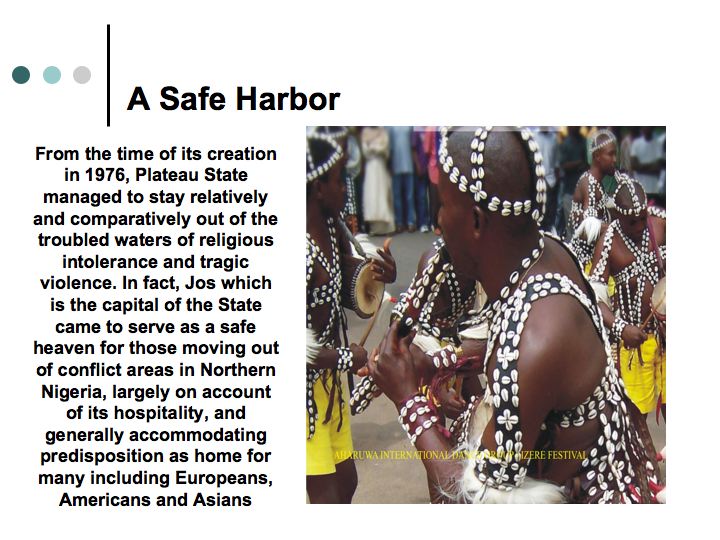 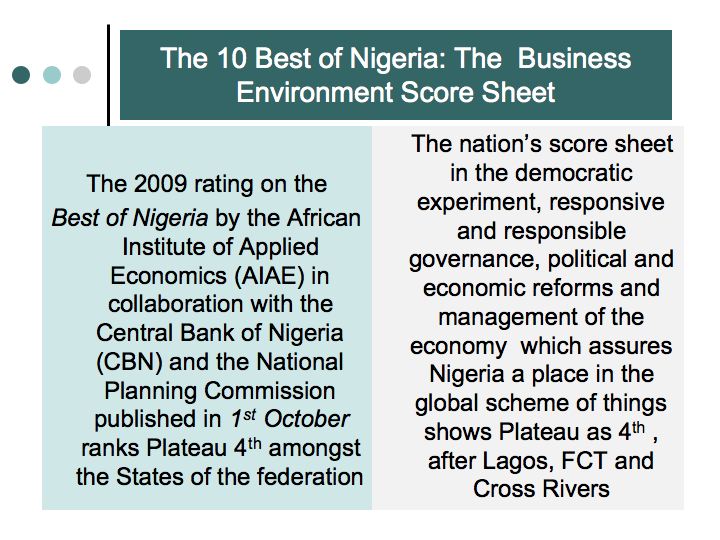 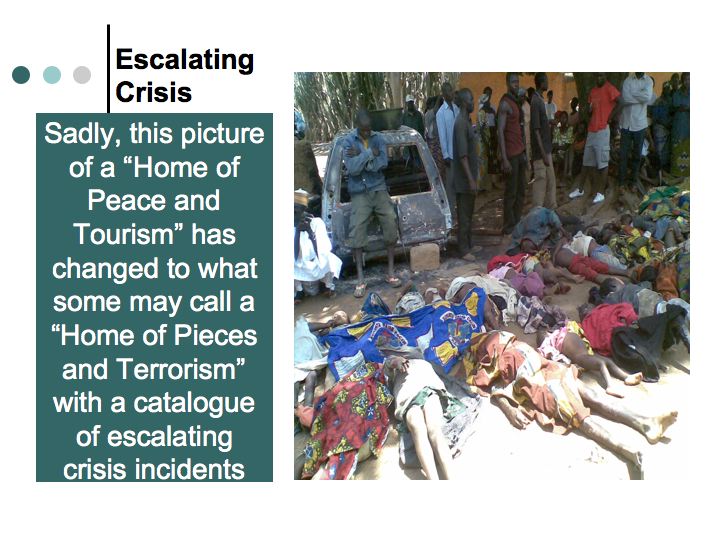 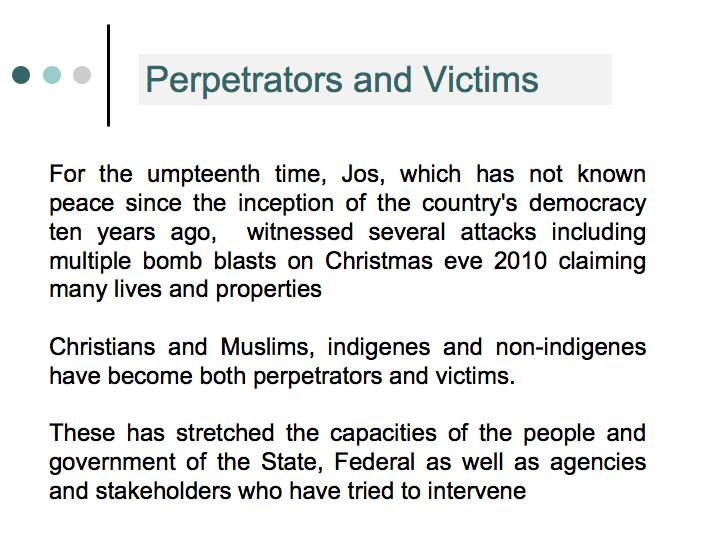 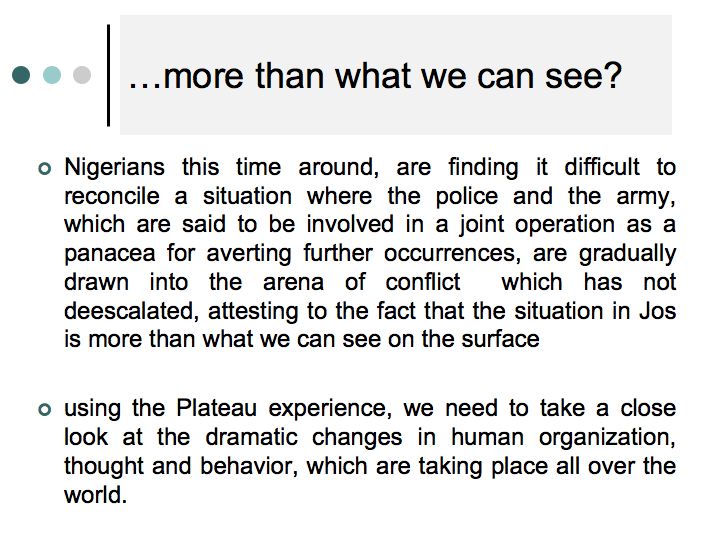 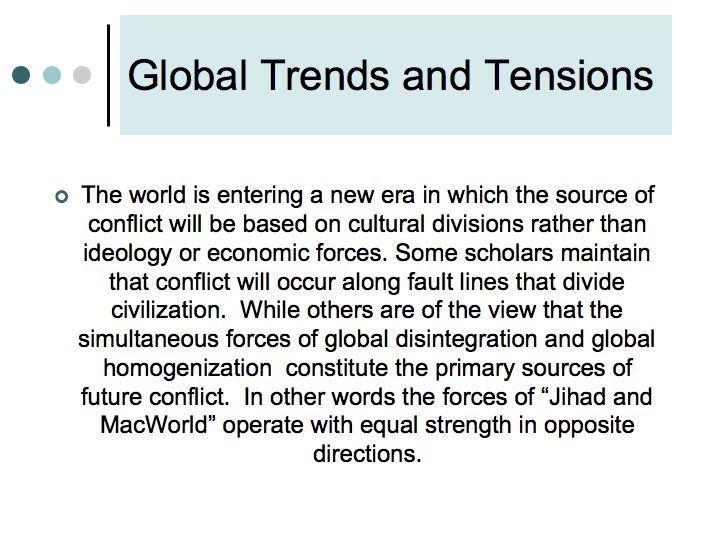 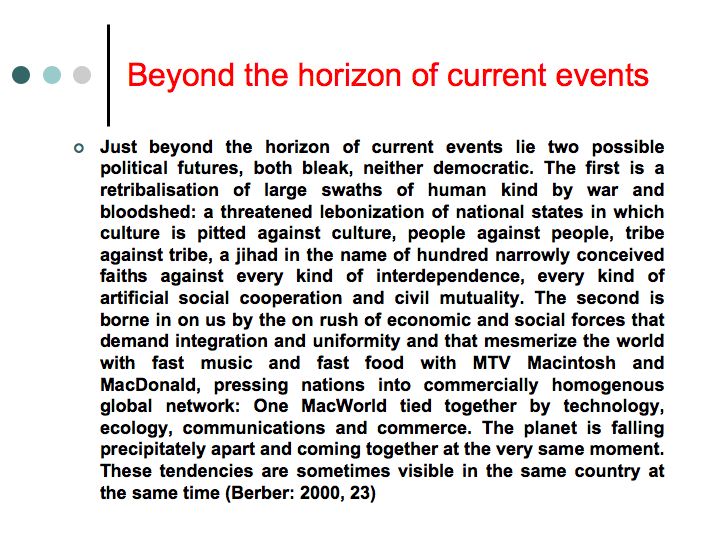 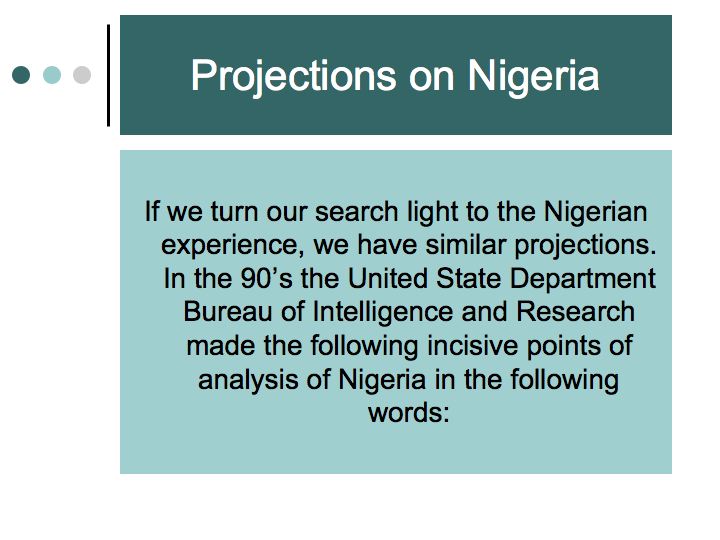 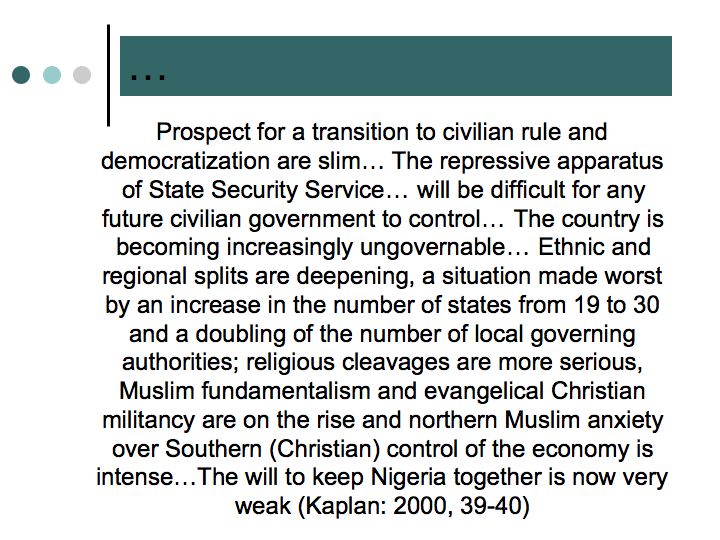 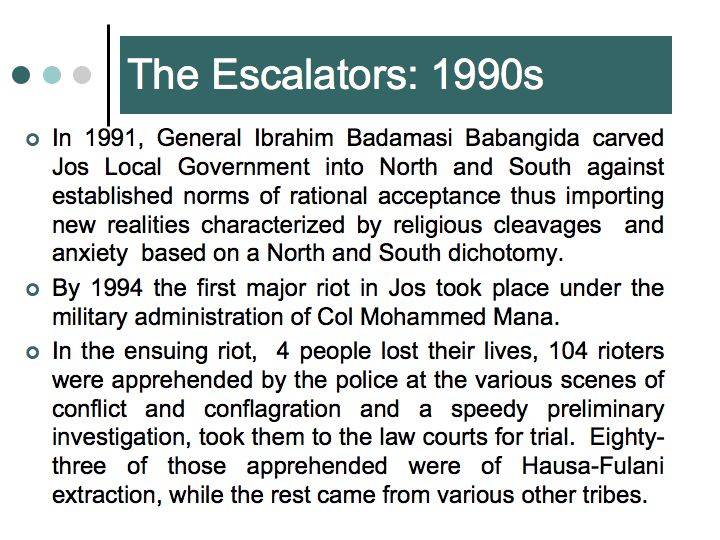 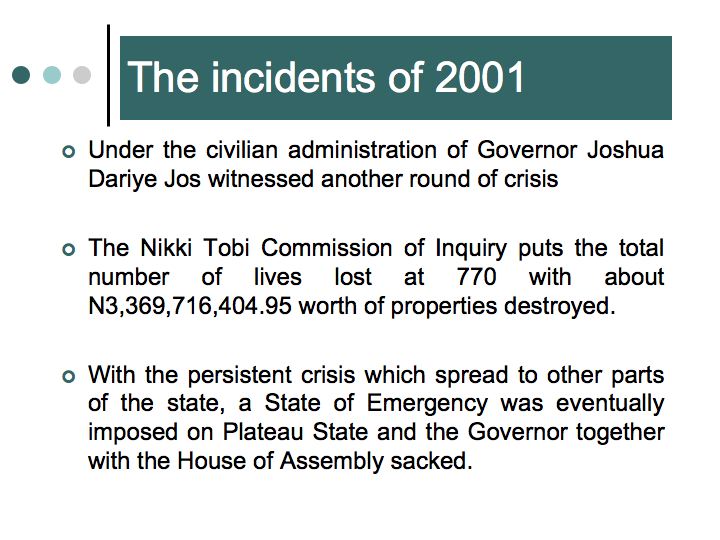 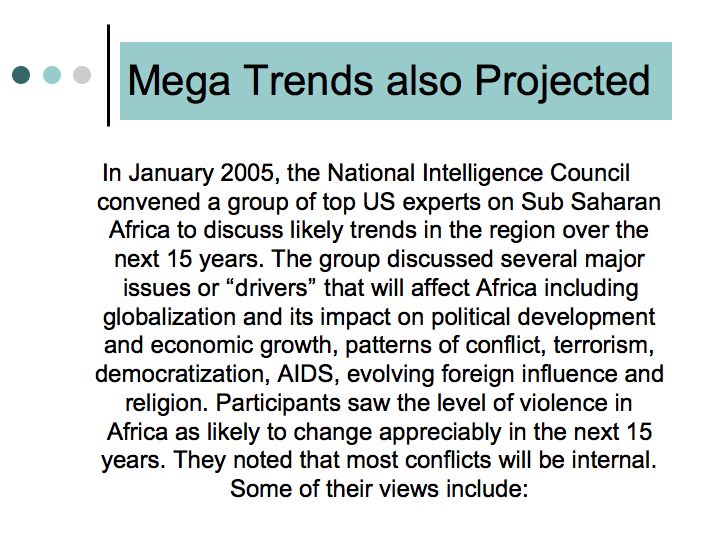 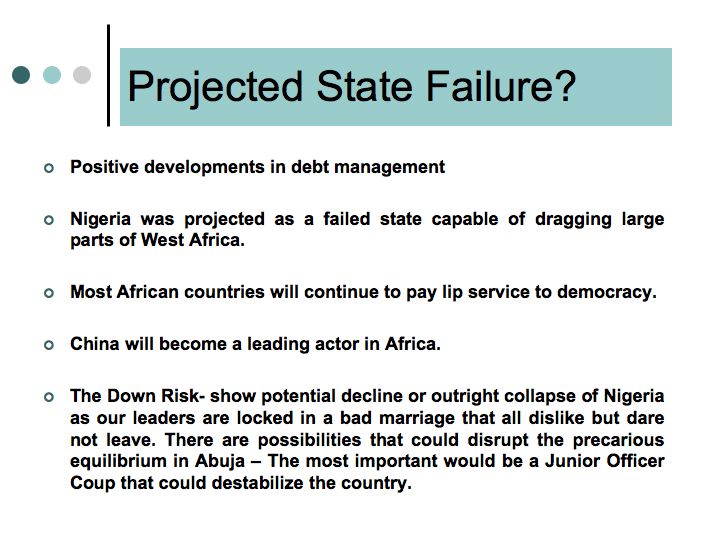 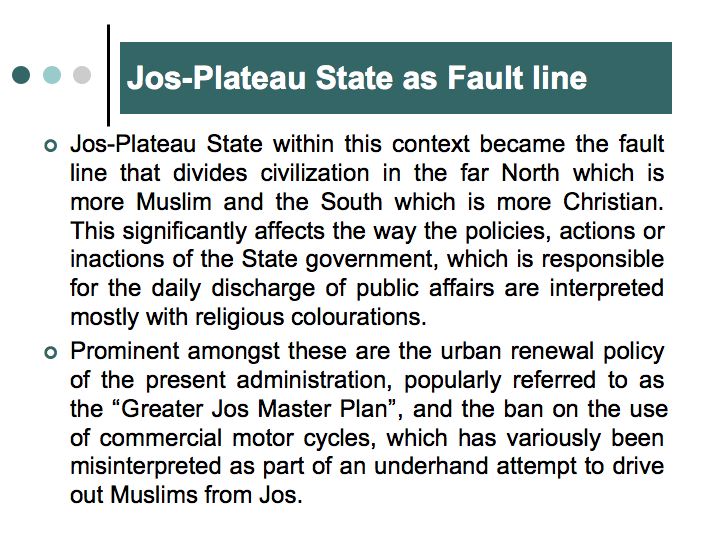 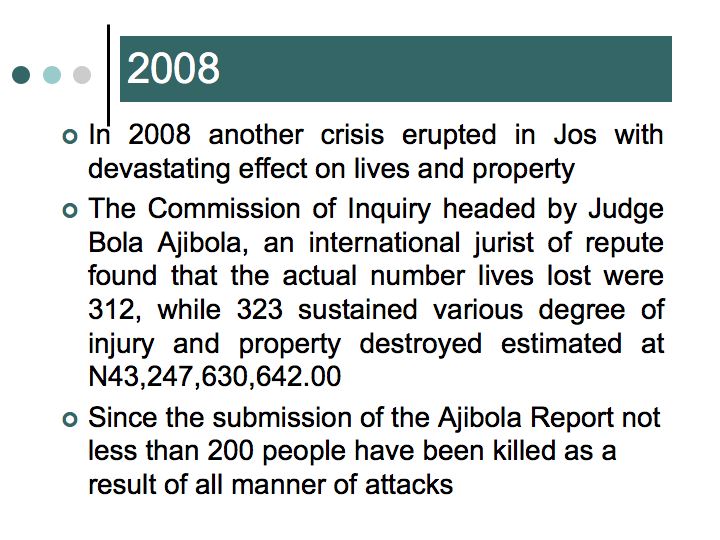 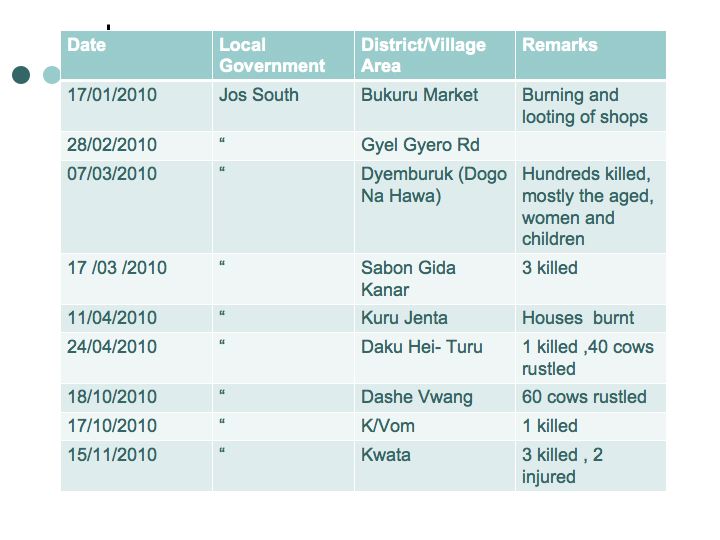 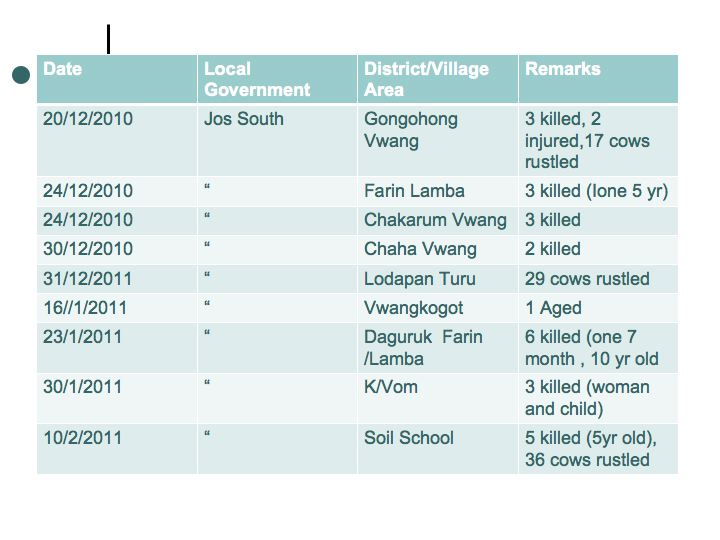 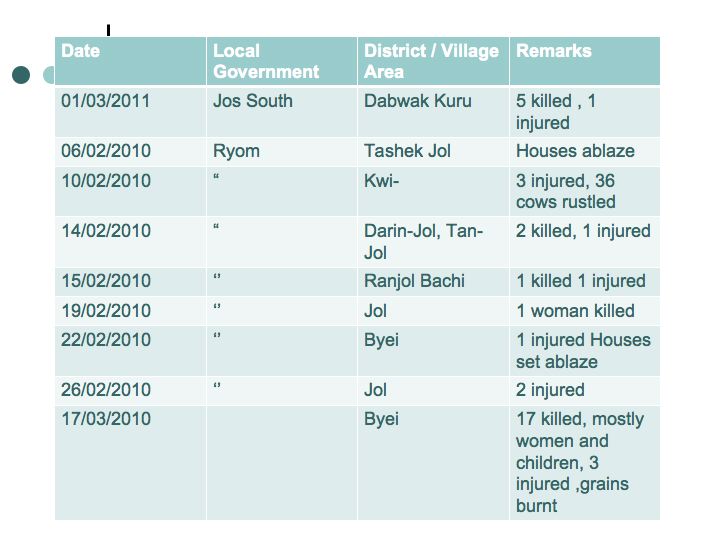 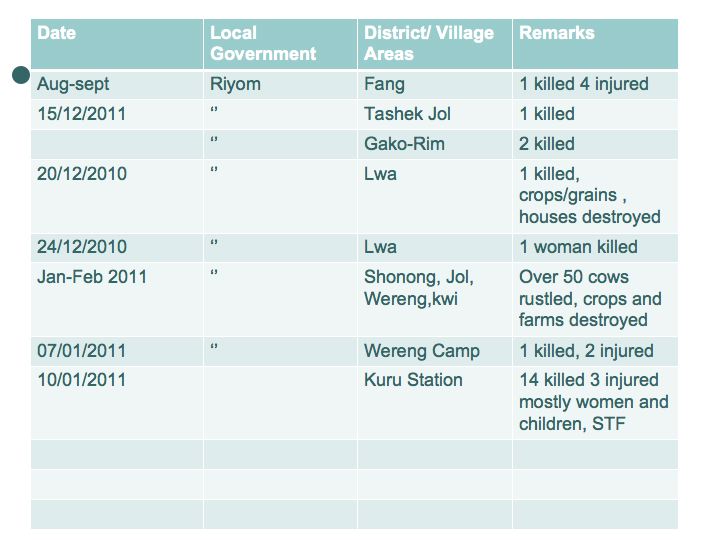 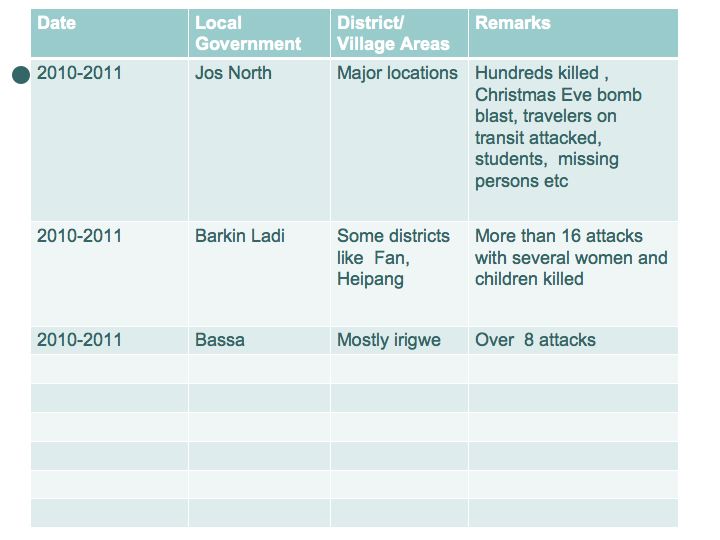 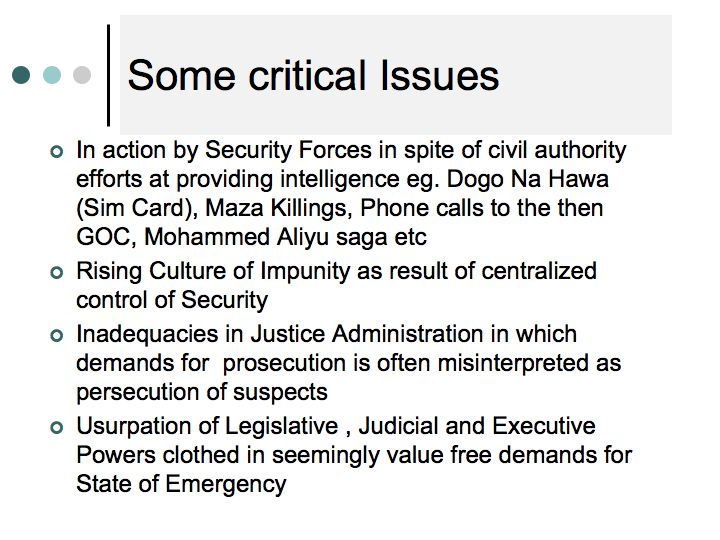 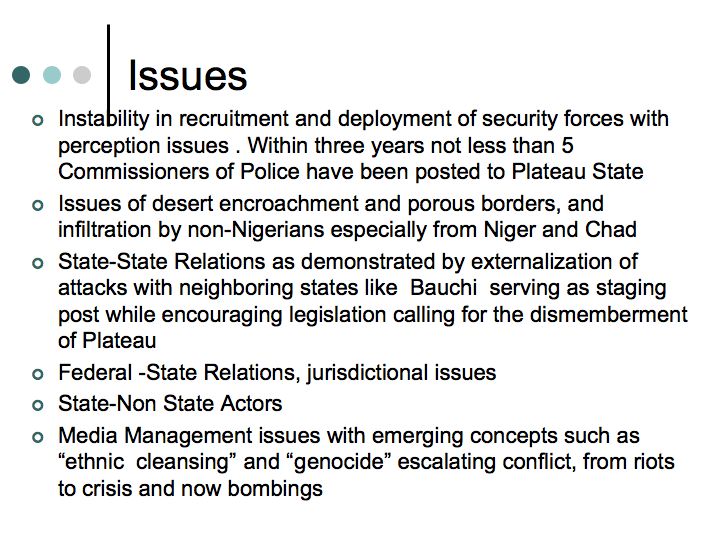